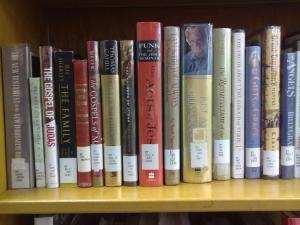 Mystery, secrets, the “feel-good” life, church conspiracies and a testimony of a terrific man.  This about sums up the “Christian religion” section at our local library.  The section is one shelf long containing a poorly chosen 20-25 books (except for “Just as I am” by Billy Graham).  Among the only well-known authors were Billy Graham and Joel Osteen.  So what about CS Lewis, GK Chesterton or D. Martin Lloyd-Jones.  Of the living, perhaps they could shelf John Piper, John MacArthur, RC Sproul, Max Lucado, Kevin DeYoung or Ravi Zacharias.  I am thankful they chose one author, who is renown the world over, Billy Graham.

As I looked at the shelf, I realized I was looking at a snapshot most Americans have when it comes to Christianity.  Say the word “religion” and at least these two things may come to mind to average Joe; everyone has seen a Billy Graham crusade, and everyone has at least heard of the “Da Vinci Code”, by Dan Brown.  Religion itself though is rarely on America’s radar.  Religion is brought back into focus in ones life when a few things happen; a tragedy strikes, the Holy Spirit is really prodding their hearts to search out the truth, or when a “church conspiracy” or mystery is brewing.  Vatican secrets, the Gospel of Mary, the Gospel of Judas, the shroud of Turin all tantalize the imagination into the question, “what would we really know if all secrets were revealed?  That Jesus Christ really didn’t rise from the grave?  That the church really is a way to control the masses?”

But people start asking questions with answers that they just don’t like.  When an answer comes they don’t like, the question is asked again but to a different set of authors who will give them the answer they like.  We are not really a spiritually minded society anymore, so spiritual questions don’t really have a place anymore on the list of questions to be answered, but when a spiritual question is asked, a natural answer is desired.

All that to say, this was somewhat of a reminder to me that shows where most people are in relationship to the church in America.  We treat religion the way we shop, the way we view entertainment: sell me, thrill me, pick me up shake me around and set me down wobbly-legged.  Who wants to go to a “church service” these days? 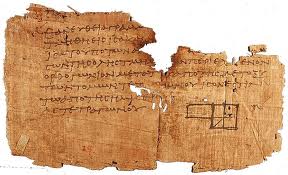 I have been reading an exceptional book on textual criticism, and found it to be incredibly helpful in being arrows that effectually shoot down ancient and modern heresies.  Dr. C. E. Hill has recently written a book entitled, “Who Chose the Gospels?”  It is a scholarly pursuit to the origin of the gospels.  From Jesus’ mouth to the council of early church-fathers who helped formulate the Bible we have now today, I plan to write as much compelling material from the book to here.  Be looking for such material in the future.

The recent movie “DaVinci Code” posited a number of inaccurate things.  It mystified its audience into thinking that the Gospel of Mary was accurate, and woo-ed his readers into believing that Jesus just might have had relations with Mary Magdalene.  Reasons as to why this is false, and how it is false is to come, but consider an excerpt from the gospel of Mary;

Peter said to Mary, “Sister, we know that the Savior loved you more than other women. Tell us the words of the Savior which you have in mind since you know them; and we do not, nor have we heard of them.”

Mary’s gospel goes on to describe how she does so “enlighten” all the apostles.  But wait, Peter said “Tell us the words of the Savior…since you know them; and we do not, nor have heard of them.”  Before Jesus met Mary, Jesus’ apostles had already been living, listening, and absorbing the teachings of Jesus.

Inasmuch as many have undertaken to compile a narrative of the things that have been accomplished among us, just as those who from the beginning were eyewitnesses and ministers of the word have delivered them to us, it seemed good to me also, having followed all things closely for some time past, to write an orderly account for you…

Luke has just countered Mary.  Mary’s gospel said the accounts came from her because the apostles didn’t know them.  Luke said, those who were an “eyewitness” and were co-ministers of the word with Christ (the apostles), were the ones who have compiled the gospels.

What we have here is a core debate of many textual critics.  The science of textual criticism seeks to explain why and how the gospels got into the Bible in the first place, and why gospels like Mary’s (which were written only about 140 yrs or so after Christ died) are considered not a part of your Bible.

If we are to effectually defend the Bible against claims made by people like Dan Brown, and people who have been duped into thinking that these heresies might be anywhere near the truth, we need to know our history of the Bible.  We may be able to bravely ask questions like, What would it be like if the non-traditional gospels were considered word of God?  Would we be compromising theological truths?    God did not just download His word to us via “Microsoft Holy-Word 20,000”, He used men and women through a span of over 2,000 yrs to bring together God’s very word to us.