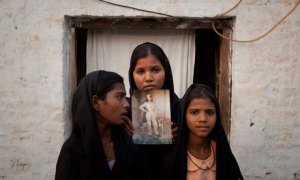 Justice is hard-wired into all of us.  We all have a sense of fairness, and when injustice shows its ugly face, something cries out within us, “NO!  This is wrong!”

As of December 6th, 2010, Asia Bibi a Christian field worker in Pakistan, mother of five children, wife to a Christian husband, is scheduled to be hanged.  Why?  The allegations are more shaky now, as the accusers are being less specific, as it “will complicate matters” worse if they do say exactly what Asia said.  Her crime was speaking against the prophet Mohamad.

There is a possibility that she might be pardoned by the president.  This great news is quickly sombered by a threat shared by many.  A local cleric announced, with the backing and authorization of Pakistan’s second largest local newspaper, that if the judicial system does not hang her, a reward will be given to anyone who can kill her.

Canada and other nations have offered asylum to Bibi and her family, if they survive what their kinsmen are threatening upon them.  While Asia is in jail, her family is continuously receiving death threats, saying things like “Wait til we get our hands on you.”

Brothers and sisters, do not be angered too much.  Don’t burn with hate towards the people carrying out these terrifying acts of injustice.  Instead, remember the words of our Savior, Jesus Christ,

“But I say to you who hear, Love your enemies, do good to those who hate you, bless those who curse you, pray for those who abuse you”

Why?  Does it even make sense to love those who hate you?  If this life was all there was, no it would not make sense.  But because we serve a God who has provisioned life after death, a life eclipsing this one in greatness, it makes every bit of sense.  We Christians have an eternal focus, that allows us to truly not be afraid of what mortal man can do to us.

Jesus said, “love those who hate you.”  Why would God want you to love those Pakistanis, or anyone who would hate you?  God want’s them as his own.  God wants to redeem them.  Because God is eternal he works in his eternal scope of work.  It may take a believer loving a very hard to love person for them to hear the good news of salvation.  In God’s divinely perfect plan he has deemed us as messengers to the world, of the good news of Salvation to ALL who believe.

But in this hour, remember to pray for Asia and her family.  Soon she will join her maker in perfect paradise, but her family will be left with a scar of a memory, a testimony of their mothers faith, and a life to live on earth for God’s glory.  Losing a loved one is difficult, and honestly I can’t relate to the Bibi, but much painful struggle must be the theme of days recently.  Pray for strength for them, pray for perseverance, and safety!!

Don’t forget to pray for the Pakistani’s who are carrying out this unjust deed, also.  As Christ prayed on the cross, “Father forgive them, for they do not know what they do.”

Here are some articles to read about whats going on;

His Peace Upon Us – Death for Blasphemy? (a missionary who’s writing I’ve greatly appreciated)

At a market in Islamabad on Tuesday, Mr. Qadri pumped more than 20 rounds into Mr. Taseer’s back, Pakistani media reported, and yet was not fired on by any other member of the security detail, raising still more questions about whether any of the others knew of his plans in advance.

Mr. Qadri immediately surrendered, called himself a “slave of the Prophet,” and indicated that he had killed Mr. Taseer for his campaign against the blasphemy law.

**Scroll to bottom for Updates**

A good friend of mine used to always say something that would instantly put a smile across my face.  If you said something in a conversation that was not entirely reputable, not altogether flattering, but rather was a slightly less than boastful stand on any subject, he would point out how you were wrong or how you might not be sharpest tool in the shed, and say, “See how you are?” in an attempt to shame you, often jokingly.

I like how he exposed how what we say and do is often an accurate representation of what’s in our heart.

“…For out of the overflow of the heart, the mouth speaks.”

Today my college professor from Moody, Pakistan native and my boss from when I used to work at a Ministry/Bookstore in Little India, whose name is Dr. Namaan, wrote me today as part of a mass emailing.  It gave me a link at the bottom, but the body was a quote from the linked website. It read,

For the first time in history Pakistan has sentenced to death a woman for blaspheming.  ‘Asia Bibi, who is 45 years of age and has five children, has denied blaspheming and informed investigators that she is being persecuted for her Christian faith in a country where followers of Christianity often face harassment and discrimination.’

From investigations in court, this current development was a result of this; Asia is wife and mother of five to a Christian family, of which there are three families in the village, the rest are Muslim (total village population unknown to me).  She worked for a landlord in her village and worked with other Muslim women.  When those women started pushing her to recant her faith and choose Islam, she would not bend to their pressures.  One day after the women were pressuring her to join Islam she shared her faith in Jesus Christ with them, and they became angry and beat her.  Another website says the beating began because the Muslim refused to drink the water brought by this Christian woman.  Some men nearby forced her into a locked room.  At this point, I have to defer to the news source, at the link I provided on top, what happened next was excessively over the top, humiliating, and from a humanist point of view, quite unnecessary. Praise God all of the intents were not actuated.

On hearing this response the Muslim women became very angry and began to beat her. Some men took Asia by force and locked her in a room. They used the PA system of a local mosque to broadcast plans to punish Asia by blackening her face and parading her through the village on a donkey.

Asia and her children were set upon by an angry mob later on, and then taken to a police station after some Christians informed the local Police and had her put into protective custody. Later that evening a Blasphemy Case was registered against her after pressure was placed on the Police by local Muslim Leaders.
This miscarriage of justice and violent social condition illustrates the severe and intense persecution that people of a minority faith experience in Pakistan.

(I should note at this point, false accusations of blaspheming the name of Mohamad is quite common in countries like Pakistan, in order to keep pressure on the Christians and sometimes this does lead to violent persecution and death. Our prayers ought to be with them often.  To put your finger on the pulse of such suffering and persecution you can visit Voice of the Martyrs for up-to-date info on such things, specifically on her, here.)

I don’t know about you, but my mind remembers the times I’ve been ridiculed and mocked for being a Christian.  Like I’ve written before “tolerance is the glue to any society”.  You can have an argument with someone, and strongly disagree, but the instant indifference and obstinancy are birthed you’ve got a society now set against each other.  From a secular vantage point that is how I’m looking at this instance in time.  These Muslim women were completely intolerant and pig-headed in my humble opinion.

Lets switch gears to spirituality.  Both Muslims and Christians believe in God.  We both believe that Christ existed, but we believe He came to save.  Another difference I want to highlight is this; these women were living like this life is it!  They weren’t living like heaven is a possibility.  For those who believe heaven is a place we can all possibly go, the next question we ask is, well who?  Who goes to heaven?  This is where I’m going to be brutal.  Those who think they are going to heaven, but objectively keep others from finding the way to it, are of an evil akin to that of the devil.  Let’s be honest; if you were in the desert and someone came to you thirsty and almost dying, and you had a jug of water, but denied having any water to that dying man, what evil would make you do that?

At this juncture, I must clarify, I’m by no means classifying the world’s Muslims into the category and behavior that these women displayed.  I’ve met and are friends with many Muslims who I respect and have mutually-respectful conversations about spirituality.  Sadly, there is immaturity among us, found in the form of extremism at times.  It needs to be called out and dealt with.

What is the Christians response in all this?

1.  Pray.  We know prayer is one of the main ways we entreat God to move by.  Pray for Asia Bibi, and her family as these are definitely hard times for them.  Pray for those who do not yet know Christ as their Savior, specifically the women who perpetrated all this.

2.  Sign the petition.  As mentioned above, you can visit this site, and sign a petition on her behalf.

3.  Adopt an eternal mindset.  Engage yourself in the plan of God.  Realize that you who are saved, are not just saved, but are now the messenger of salvation.  Millions have died for their faith in the past, because the world would not listen.  More instances will come like this in the future, but this we know…the battle has already been won, and our Christ will come with a shout from the clouds, with TRUE justice on his shoulders.

4.  Love on people.  Yes even people affiliated with evil things.  At one time you yourself, if you are now a Christan, were at enmity with God.

Much more can be said, but I will stop here.  How has this impacted you?  Care to share any thoughts?

This in from CNN.

The town cleric, who made the initial complaint against Bibi, called her death sentence one of the happiest moments of his life.

The clerics tears are in stark contrast to those shed by Bibi’s daughter Isham, who wants her mother to live.

Again, “See how they are?”  You can watch the video here.