Fading in and out of morning sleepiness on the train to work today, I overheard of a conversation; the lady’s side of the conversation rather, as it was over the phone. She was talking about plans for the day…she made some pauses between breaths as she was listening…and then started saying, “Yeah no…yeah no.” I was like, why is she contradicting herself in the same breath. Positive to negative, right away within the same second of each other. So odd. It dawned on me I was guilty of it too. I think we all are. Were all saying it. A certain mixture of question words, exaggeratives, one cup of oil and egg whites, gives the perfect opportunity for the listener to respond with nullifying comment. Doesn’t -1 + 1 = 0. Are we nullifying ourselves when we utter opposites like that. It doesn’t seem to be this way.

Ladies and gentlemen we have a new word. I’d like to call it “Yaano”, [yeah! + no] If had spelt it “yeahno” it would still have the ideaological context of two words still. This way, its one word.

Its almost like saying, “Yes, no”. But to us it makes sense. Lets put it in perspective.

Person A: “Hey person B, so you’re not going to go the crazy party tonight?”
Person B: “Yaano, I won’t be going.”

There you have it! The explanation of an emerging word in the English language (or its just my imagination…which it probably is).

History is so delicious! Isn’t it? Maybe its just me. We learn so much from it. Today I found something interesting connected with this phrase, “alma mater”. 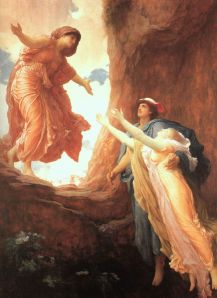 Let me first start by noting with amazement how much we derived from those darn Romans. Culture, language, law, societal system, etc. Alma mater is one of those phrases that date clear past the death of Christ and finds its landing in early Roman mythological speak. “Nourishing mother” is the direct translation, and was first used as a title for goddesses. From there early Christians who were of Catholic faith started using alma mater to describe the Virgin Mary. Then a more traditional use of the term as we know it began in a university in Italy. The University of Bologna, which is the oldest known university in the world, had this phrase as its motto. It is thought from this use of the phrase we get our familiarized usage of this term, alma mater studorum, which translates to “nourishing mother of studies”.
Another point of interest in the world of education happened around the 1600’s throu

gh 1700’s. This was an age of reviving among Christians in which laymen, pastors and scholars challenged views of God and the Church. They compared what the scriptures taught against what had been traditionally taught by the Pope and his Catholic Church, and there continued a division that was started by other men like Martin Luther and John Calvin. What Puritans realized was that there was an extreme lack of men to lead churches, or just groups of people with educated knowledge of the scriptures. Out of the Puritan movement came a resurgence of education and scholarship. Schools were started to educate people, to prepare them for the ministry to be pastors, scholars, or whatever the need was. From this was birthed schools like Oxford, Yale, and Cambridge. Much of the great ivy-league schools we know of today, were actually instituted to accomodate a growing need for pastors. Interesting, right?

Sounds funny right? Who goes burgling? A burglar does of course! In the early 19th century, England added the verb, “to burgle” into the dictionary. Why? It sounds funny, you may say, and like me might even argue that its not even a word. Sounds more like something you extract from your nose.
On what account did they do this? On account of a morphological rule called “back formation”. Words have always been a passion of mine. Think about it, its practically the medium of reality. Try this experiment! Think of a color that you paint a unicorn, a color that has never been thought up before, or even a conglomeration of colors. Now describe it to me. Unless you’re God, or infinitely creative (which is only something that God is) chances are, you had to resort to colors you already knew to describe this new color. Be excellent at describing things, you’ll be excellent at communicating just about anything. If communication were a big body, semantics would be its veins. The science of, definition, and use of words is the core vein of communication.
Returning to “back formation”, look at the title of this post. “I’m a burglar, you want to burgle?” Back formation is rule in the English language, used by Linguists (I happen to be one), to describe the end word after truncating an affix, be it an post-fix, or pre-fix, however you get your fix (I know…I know!). Speakers took a noun, “burglar”, and took off the “-ar” to change it to a verb, according to its dyad. A farmer farms, a writer writes, and evidently….a burglar burgles. But does a yachtsman, yacht? Or does a carpenter, carpent? Obviously no. That’s because its not a universal rule. It’s illegal at times.
So next time you’re searching for a word to describe the latest breakthrough, to express your hearts desire, and you come up with a word that sounds rather funny, but makes sense, chances are you applied proper English “cut-and-paste” techniques, but just with the wrong word.
Perhaps a next post will explain why the English language (or the Germanic languages in general) are so easy to work with (take off an affix here, put one there…what gives?). Stay tuned!